Small, but exemplary: how Ireland’s energy transition problems are a microcosm of the world’s challenges: Part 1, our energy trilemma 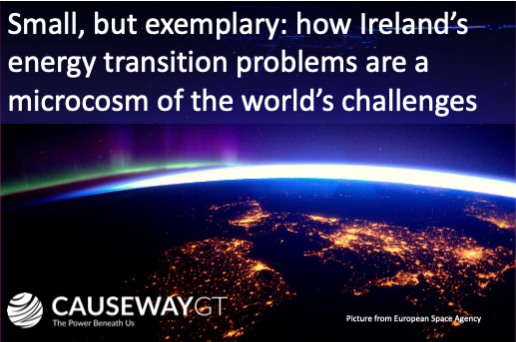 The island of Ireland, comprised by the Republic of Ireland (ROI) and Northern Ireland (NI)  with a combined population of just under 7 million accounts for less than 0.1% of the world’s population and 0.17%  global greenhouse gas (GHG) emissions.  And yet both jurisdictions are taking their climate change responsibilities seriously in devising climate change bills and energy policies to radically decarbonise energy.

Both need to face the energy trilemma of how to make energy more sustainable, while improving its affordability, and maintaining security and reliability. Lighting, heating and cooling need to be clean, at a reasonable cost and always available.

While Ireland’s version of the energy trilemma is small, it is nevertheless exemplary of the same challenges faced by other countries around the world

There are already many examples, where a singular policy focused on one element of the trilemma, such as California’s focus on emissions, has led to problems with the others, in their case on cost and reliability.  The state is working harder on an integrated systems approach to improve the resilience and reliability of the electricity grid, and the experience provides much learning for others.

A focus of purely on affordability can have also wide-spread negative impacts.  Fuel subsidies in Nigeria are enormous, around US$3.9 billion, and come at great social and environmental cost: the opportunity costs of such spending on other development objectives are large; the distribution of resources to the state governments is reduced; and cheaper petrol encourages greater pollution, congestion and climate change (McCulloch et al 2021).

While a primary focus on energy security results in countries using the resources they control.  In recent decades, electricity in Poland was mainly produced by burning black coal and lignite.  While share of this raw material in the energy mix is systematically decreasing related to climate goals in 2020, slightly over 70% of energy from coal was produced in Poland.

As we look to solutions for the trilemma in Ireland and beyond, firstly it must become greener.  Much more on that in future blogs.

Secondly, energy must continue to be affordable, and if anything needs to become cheaper with time to allow the economy to flourish and grow.  Indeed, a healthy economy makes for resilience for society in the face of climate change and other risks like global pandemics.

Thirdly, energy must be secure or reliable, free from risks such as obstruction, price gouging by monopolies, or intermittency of supply.  Businesses, communities, and public infrastructure can’t afford the lights to go out all of a sudden.  Energy security is and will continue to be an issue because of the ongoing relevance and inertias associated to energy in contemporary economies.

These factors form a trilemma for policymakers, consumers, and businesses to manage. Unfortunately, it’s all too easy to polarize debate and action onto one of these factors, for example, be slavishly focused on emissions reduction, and be forgetful of the other significant factors that need to be part of the solution space. 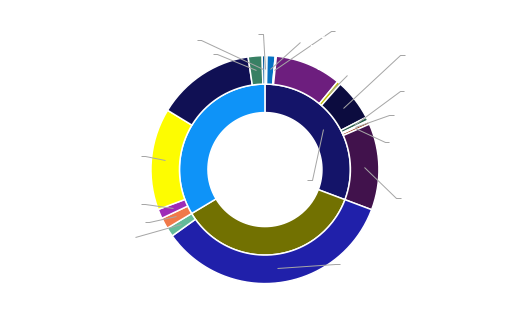 The Republic of Ireland’s energy mix is not that different from Northern Ireland or other countries in Europe or for that matter the USA.  It’s the scale of consumption (and therefore the magnitude of the challenge) that is different.  Northern Ireland’s consumption is about one fifth of that of the Republic of Ireland which is about 0.5% of the USA!  Nevertheless, very approximately, about one third of energy is used to heat, one third for transport and one third for electricity

Electricity accounts for 27% of energy-related emissions in Ireland, but only provides 19% of final energy. This reflects the generation of electricity in thermal natural gas and particularly coal power plants which is inefficient and produces high GHG emissions.  The amount of GHG associated with electricity generation is coming down, as renewables, particularly wind, further penetrate the grid, regularly attaining 40% now and with a goal of 70% renewable energy in the grid by 2030. Between 2016 and 2019 there was an 86% reduction in coal and a 54% increase in renewables used for electricity generation, leading to a 33% reduction in the CO2 emitted for each unit of electricity produced.  All of Ireland’s coal and more than half of its natural gas is imported, so are exposed to security and price risks.  So, there is a triple incentive to reduce fossil fuel use for electricity generation.

However, getting off fossil fuels doesn’t necessarily mitigate the security and price risks.  For example, because of the intermittency and variability of renewable energy sources like wind, there may still be the need to rely on electricity interconnectors to Great Britain and Europe, particularly if utility-scale battery storage technology remains small capacity and expensive.  Hence further investment is required to increase grid capacity and resilience and the need for baseload to provide inertia to the grid remains a huge concern that in our view requires us to carefully consider options for all sustainable, indigenous electricity generation options.

Transport accounts for the largest proportion of GHG emissions in Ireland.  Vehicles in the ROI put an astonishing 47 billion kilometers on the odometer in 2018 and 76% of that distance was in private cars.  In 2018 Ireland consumed as primary energy 52.7 million barrels of oil (as refined products) and 68% of that fueled transport.  There is no indigenous crude oil production in Ireland, so the country is 100% dependent on imports of foreign oil and oil products.  Hence anything that can be done to reduce oil consumption will not only reduce emissions but improves energy security.  So, optimisation of this trilemma depends on available clean technology at affordable cost of replacement of the old fossil fuel drive transport.  Here the focus is obvious make electrification of transport affordable while ensuring that electricity supply is green and local, and addressing the consequent increased demand on electricity.

SEAI’s latest numbers for Heat in Ireland show that it accounts for 33.6% of Irelands energy use. About half of that heat use is commercial (including industry and agricultural) and half is domestic.  Energy use and CO2 emissions for heating in Ireland have increased since 2014.94% of that energy is sourced from fossil fuels and over 60% of them are imported.

So, what are the solutions for the heat trilemma. We believe the principal method of decarbonisation is to electrify as much heat as is practical, utilising ambient heat such as solar thermal and geothermal, extracted and amplified from the local environment using heat pumps.

Causeway Energies is focused on combining local geothermal energy with green electricity, generating affordable heat to decarbonise heat in industrial and large commercial settings. Using closed-loop systems the approach is sustainable (no CO2 produced), and local to the customer.  The addition of green electricity through industrial heat pumps increases capacity and temperatures we can sustainably deliver customers. The combination drives affordability.

The energy trilemma is part of our business model in the same way we have argued in this blog that it needs to be the frame of policymakers leading the energy transition at the scale of regions, countries and continents.  With geothermal as our core renewable energy source, we are committed to delivering industrial and large commercial customers heat (and cooling) that is not only clean, but is affordable and reliable.