The Possibility of Geothermal in 4 Charts 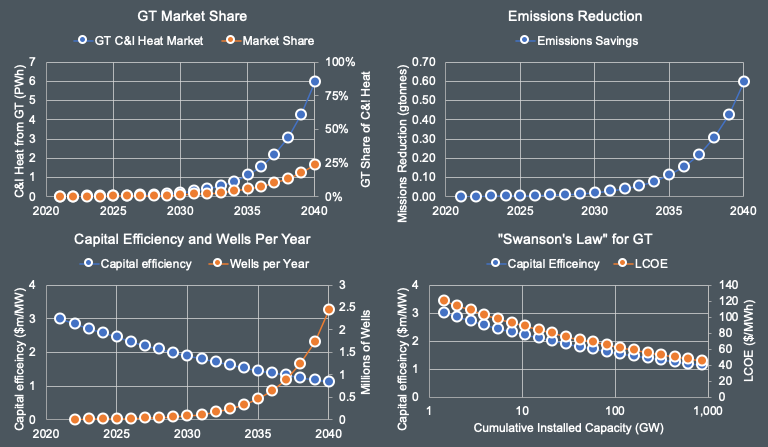 There is currently much excitement and curiosity about growing career prospects in the geothermal industry as it undergoes a renaissance to fulfill a material role in the energy transition.  Oil and gas workers rightly see the opportunity to transfer their skills and expertise over to geothermal.  Graduating earth scientists and engineers wonder if there are careers to be had in the industry.

The problem right now is that with the geothermal industry germinating in its pioneering phase, there aren’t many jobs at all.  Although geothermal has been around for centuries, its contribution to energy is tiny now.   But what’s possible?  What if the geothermal industry is similar to solar PV 15 or 20 years ago and is about to explode into exponential growth in the “geothermal decade”?

We illustrate that possibility with the four charts above.  We are addressing only the large Commercial and Industrial (C&I) heat sector, which is currently globally roughly 10 PetaWatthours (PWh) per year.  This is the market segment on which Causeway Energies is focused.  In this thought experiment we are ignoring two other segments of huge potential: domestic shallow geothermal (aka ground source heat pumps) and electricity generation from geothermal.

The first chart, top left, showing growth in global geothermal market share assumes a 40% increase year by year of the amount of geothermal heat provided to C&I customers.  Note that this is from a standing start of about 10 TerraWatthours (TWh) in 2021.  As with any exponential growth trajectory it’s slow going initially with only 1% of the global C&I heat market captured by 2030 (although roughly similar to the IEA 2050 Net Zero roadmap).

Although we will expand on the catalytical actions required to get this growth going in future blogs, the bottom two charts reveal some of the thinking on how this escalation will occur.  As the industry grows, more wells are drilled and more projects installed, so the experience lends to a learning curve not dissimilar to seen in the last 15 years in solar PV – often referred to as Swanson’s Law in that sector.  The wells chart, bottom left, assumes that each meter of well delivers 100 W heat capacity and that the average well length is 1000 m.

There were about 55,000 oil & gas wells drilled around the world in 2020, and our geothermal growth trajectory of geothermal drilling exceeds that in 2029.  Let that sink in.  To match the projections for geothermal in the IEA 2050 Net Zero Road Map in2030 there will be as drilling for heat as there is today for oil and gas.

A 5% improvement per year in capital efficiency of projects together with the same in operational efficiency leads to capital and LCOE improvements and a Swanson’s Law lookalike for geothermal.  Geothermal’s LCOE quickly gets into the zone of its fossil fuel competitors for heat and then leaves them in the dust.  This should create a virtuous cycle of increased demand and supply.

So, what about jobs?  We believe that the skinny margins of geothermal projects will dictate fewer jobs and lower wages than we’ve been accustomed to in the oil & gas industry.  Nevertheless, consider that in the USA alone about 22,000 wells were drilled in 2020.  There are roughly 570,000 people employed in the upstream oil & gas sector.  So that’s 26 people for every well drilled.  Let’s assume instead it’s a 10:1 ratio for geothermal.  That means by 2030 the global workforce in geothermal – only the C&I sector ­ would be about 0.6 million in our model, but on a steepening growth trajectory with a workforce of millions required in the 2030s.

Imagine that.  Millions of science, engineering, drilling, construction and operations jobs in a renewable energy industry.  What do we need to get there?

Investment, private and public, in that endeavour.

And public and policy support for the industry to accelerate deployment.