Small, but exemplary: how Ireland’s energy transition problems are a microcosm of the world’s challenges. Part 4: twists and turns on the geothermal pathway

In our last blog we provided some projections on how geothermal can contribute to decarbonization of energy particularly heat.  With the Department for Economy in Northern Ireland about to announce a new Energy Strategy, we used Northern Ireland as an illustrative example.  Our projection concluded that a 75% reduction in emissions through a systematic deployment of geothermal heat pumps in residential, commercial and industrial facilities can replace most of the heating currently provided by fossil fuels.  In this follow up piece we outline the main challenges to overcome if geothermal is to play this role.  As before, Northern Ireland and Ireland state of readiness for geothermal is similar and quite representative of many other places in the world.

The table above summarises our view of the readiness for geothermal across four main energy use sectors. For direct use of geothermal heat in homes, business and industry the geology all seems suitable for closed-loop geothermal systems and there also appear to be opportunities for open-loop shallow aquifer and river/lake heat sources.  The barriers in front of more shallow geothermal (or ground source) heat pump uptake in Ireland and the UK appear to be more about awareness and ambition, fuel/electricity pricing and supply chain capability. 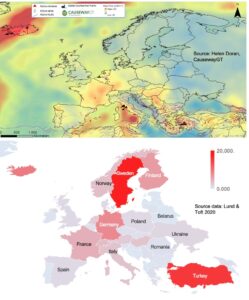 For example, compare Sweden with the UK and Ireland.  As illustrated in the two maps Sweden has the highest use of geothermal heat in Europe, higher than Iceland and Turkey, despite the hot geothermal resources of those countries.  The UK and Ireland have better quality geothermal resources than Sweden and yet Sweden uses much more geothermal.  As part of all overall ambition to utilize indigenous energy sources, Sweden has been using geothermal heat pumps for several decades now with 1 in 5 homes having this utility.  It clearly has the supply chain expertise to install and maintain the ground loops and pumps. 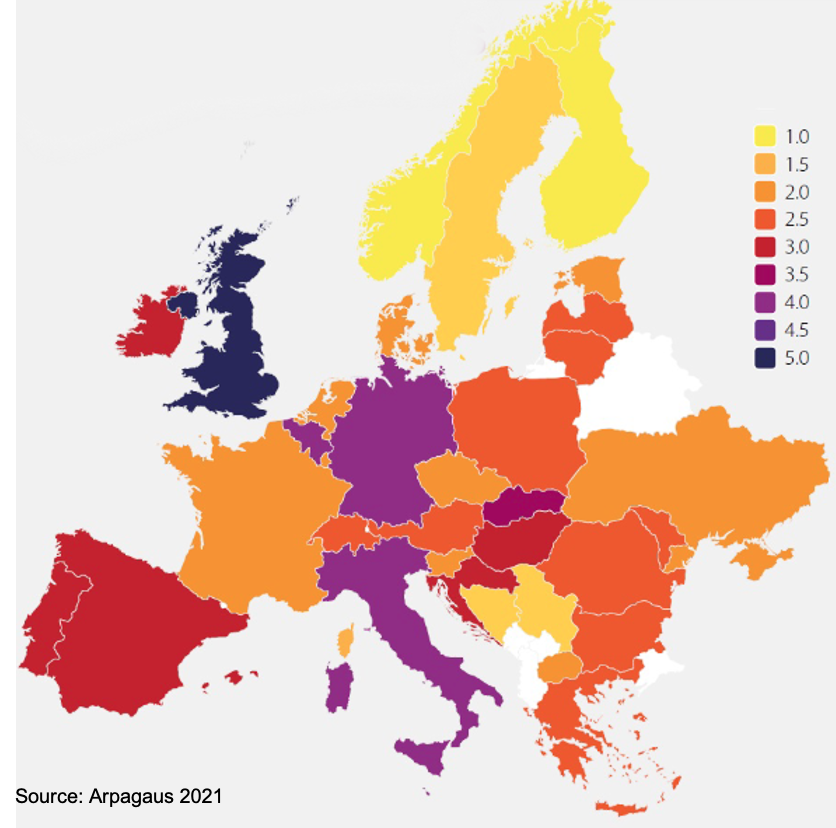 A key factor to point out is variation in the ratio of electricity price to that of natural gas.  This ratio varies remarkably across Europe from near parity in Norway, Finland and Sweden to the UK where electricity price is five times higher than gas.  This variation is largely down to how social and environment obligation costs (taxes) are distributed.  In the low ratio countries more levy is placed on fossil fuels.  In the UK the levy in electricity is more than 50 times higher than that contained in natural gas.  This imbalance is critical to the economics of heat pumps which are highly efficient in extracting two or more times geothermal energy than the electricity used by the pump.  Electricity costing 3 times or more than the cost of gas undercuts this efficiency advantage.  In Northern Ireland, the social and environmental obligation is lower than England, Wales and Scotland, but the imbalance still needs to be addressed by government.

For many homeowners, the higher upfront capital costs of installation of a ground source heat pump may be difficult to afford, even with government incentives.  Similarly, innovative ways of financing and executing home insulation projects  may be required in order to benefit from these energy efficiency improvements.

For direct use of deeper geothermal heat in higher temperature processes in industry, Irish geothermal resources are about average from a global perspective although hotter temperatures do appear to be closer to the surface in Northern Ireland.  CausewayGT is progressing a technology development plan aimed at accessing higher geothermal temperatures (> 50ºC) and boosting that heat in industrial heat pumps to temperatures more than 100 ºC, including raising steam, a staple for industrial processes.  As well as the technology hurdles we are addressing, we need support with policy and regulatory matters, including the price of electricity as mentioned earlier.  We also need clarification in how the ownership of heat will be considered – owned by the surface landowner or treated like a “mineral” like oil and gas and owned by the government.  As well as speedy clarification of these issues and permitting and planning process for geothermal needs to both effectively focused on the key risks but also smart and efficient.

As the right-hand column of readiness matrix reflects, we believe that we are some time from being able to economically use Irish geothermal resources to generate electricity.  In essence heat of sufficient temperature will be at great depths and drilling cost is currently prohibitive.  Nevertheless, given investment in drilling and other well technology, as well the development of new turbine technologies, the possibility of electricity generation should be kept on the agenda.  If battery and other types of storage fail to mature into long term resilience for the grid, then dispatchable baseload from geothermal generation may be worth the higher cost of delivery.  Furthermore, we have no doubt that our learning curve for lowering the cost of heat delivery will help with the future of geothermal electricity generation.