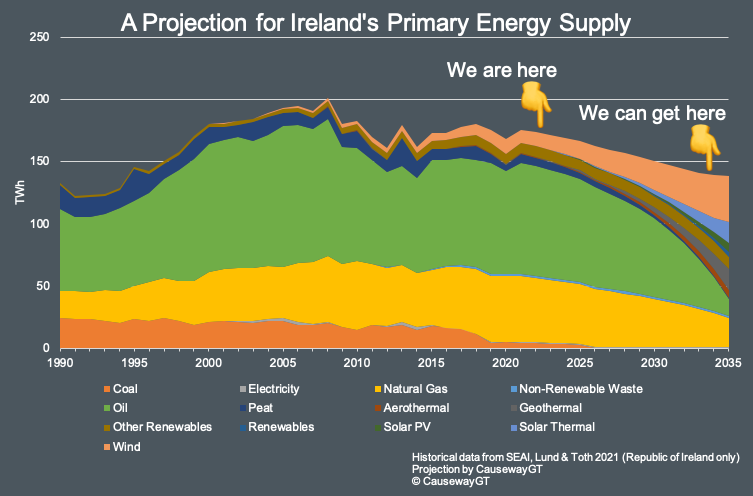 In our last blog, we presented a 2035 view of Ireland’s system after a projected transformation of the sources and uses of energy since the benchmark of 2018.  The projection of primary energy requirement and supply is presented again above with the reminder although Ireland’s energy demand is relatively smally compared to other countries, we consider the challenge and the solution set to be fairly representative of the world as a whole.

Our projected transformation of energy technology – resulting in less, not more energy requirements – is based on radical improvement of energy efficiency during generation, transmission and particularly use at the place of energy work.  Electrification of energy, replacing highly inefficient combustion of molecules, is paramount in this transformation.  Our next big lever is localizing energy supply as much as possible – enabling microsystems to use heat, for example geothermal, sunlight – Solar PV and Thermal, and Wind as much as possible.  Finally, layering on another layer of integration, storage and demand side management pulls further optimization through.

In our view, not only does the technology, and the way we use energy technology have to change, but the way energy firms procure and sell energy needs to change too.  Our existing economic system began millennia ago when farmers found that through improved agricultural techniques, they could produce more food (= energy) than they needed for themselves, the surplus could be exchanged for other goods.  Money in the form of currencies soon became the intermediary for the bartering process, but fundamentally it was energy in the form of food that underpinned the system.  The advent of energy dense hydrocarbons, firstly in the form of coal, then oil and later at scale gas, allowed a more direct form of energy to drive the economic engine of growth from the late 18th century onwards, at least in parts of the world now known by some as the “global north”, characterized by generally stable political systems that supported growth.  In the late 20th century economic growth accelerated, fueled by relatively cheap oil and gas, and little or no awareness let alone action on the extended costs of hydrocarbon combustion on the climate and other earth systems.  Big oil, big utilities and suppliers of energy founded business growth on selling more (and more) energy to customers with scant if not no regard to the wastefulness of use.

Now in the 21st century we have recognized that the growth of the hydrocarbon economy is unsustainable.  Perhaps too slowly, we are acknowledging and acting on the extended costs to climate and other earth systems of unabated hydrocarbon combustion.   In addition, as hydrocarbon resources become more difficult to find and extract, while demand continues to increase, price super-cycles trend ever upwards.  Some argue that we have passed peak affordable oil.

We believe that these dynamics requiring reduced energy demand and transformation of our energy systems mean our economic models have to change too.  The energy firms of the future will thrive through the societal purpose of delivering energy demand with clean sources, while not overshooting other planetary resource boundaries.  These future energy companies will make profit for owners and investors by selling less, not more energy to their customers.

We can learn a lot about innovative ways of delivering solutions to customers from the tech industry.  Consider how the tech industry has moved from pay-for-use to data-as-a-service.  Most of us have forgotten how much it used to cost to send an individual text message.  Nowadays we can buy a smart phone together with a calls/text/data package for a monthly fee.  The cost of the phone is commonly 70% or more below the sticker price.

How this will work in practice for energy can already be observed in new market entries over the last few years.  “Energy as a Service” for example, looks to provide customers with a package approach.  A good example is Urbanvolt, an Irish startup that installs solar PV panels at no upfront cost to the industrial/commercial client and instead has the customer pay for the energy that is used.  Energy efficiency is built into other new business models.  Another example of this approach comes from Canada where Kanin Energy aims to generate electricity from industrial waste heat.  In this case Kanin will purchase the heat from the customer but provide the plant owner the opportunity to buy the generated electricity.

Causeway Energies’s business model combines these same elements into one offering.  We assess the customer’s needs first, what is the energy work that absolutely needs to be done with the process, and then we figure out how clean and 24/7 geothermal energy can meet these needs in terms of heating, cooling and thermal storage.  We have finance partners eager to put their capital into projects with timelines measured in decades, so our customers don’t need to stump up the initial reengineering and installation capex, but instead pay for their energy use as a package.  Renewable heat as a service. 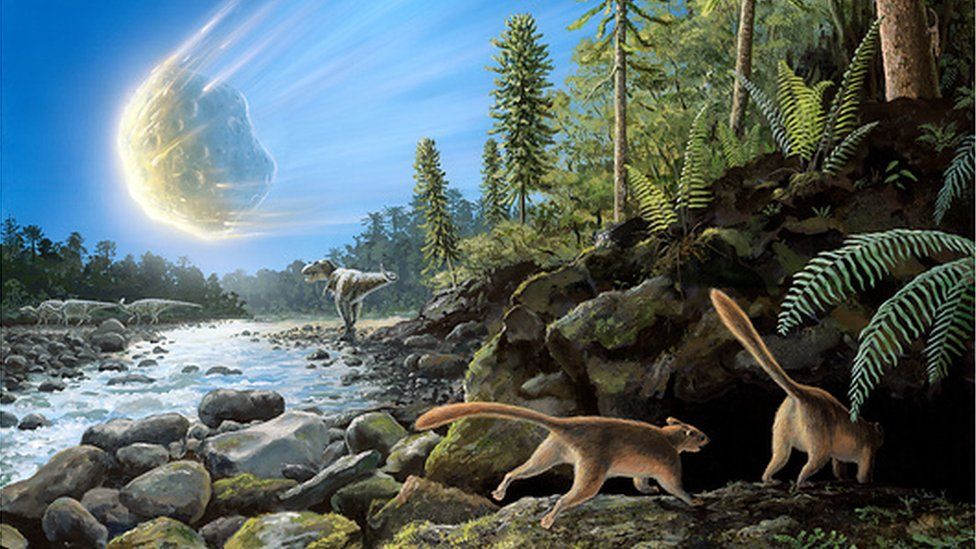 It will be interesting to see how traditional energy firms shape their futures in this changing market.  With increasing concerns about the insecurity of fossil fuels, exemplified by the impact of Russia’s illegal invasion of Ukraine, coupled with the inexorable rise in the cost of supply of fossil resources, the rate of change has become potentially cataclysmic for those bigger companies unable to adjust to the transforming markets.  We suspect that startups in this changing environment may be the beginnings of a new lineage of energy firms, nimble and adaptable to innovate on both commercial and technology demands.  Big energy dinosaurs of the 20th century that are unable to adapt will fail; some will survive through shrinking to fit the remaining demand for fossil resources.  For those that successfully make the transition will benefit from a different type of green growth for a generation or two, as the useful and used fossil energy supply is replaced by green, affordable solutions.  After that, it’s of course even more difficult to guess, but an optimistic vision is that our societies and therefore our economies because increasingly sensitive to the use of natural capital, and business models will continue to evolve towards success and award being measured more holistically than simply in terms of money.

What are the other things we can learn from transitions in other sectors like tech for the energy services?  We will come back to this in future blogs.