Small, but exemplary: how Ireland’s energy transition problems are a microcosm of the world’s challenges – part 2: transforming our energy system 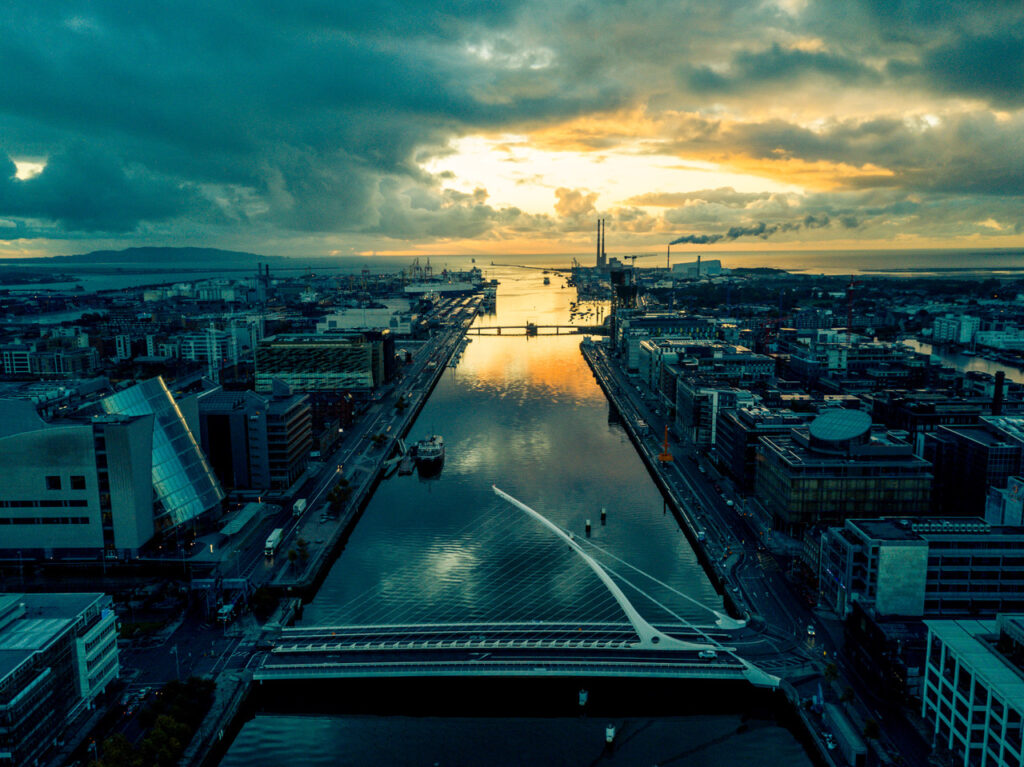 As outlined in our last blog the island of Ireland has a population of just under 7 million accounts for less than 0.1% of the world’s population, energy used, and global greenhouse gas (GHG) emissions.  And yet both jurisdictions on the island are taking their climate change responsibilities seriously in devising climate change bills and energy policies to radically decarbonize the energy systems.

In Part 1 of this two-parter we described how we need to face the energy trilemma across the island of how to make energy more sustainable, while improving its affordability, and maintaining security and reliability.  Our central point has recently been underscored by rising global natural gas prices in the face supply shortages as wider approaches, exacerbated by a shorter term increased in demand with substantial reduction in wind generation.  Energy supply needs to be secure and affordable, as well as sustainable.

Dealing with problems like these does not mean we have to revert to dependence on fossil fuels – that makes little sense from a long-term price and security point of view, let alone from the perspective of tackling climate change.  Instead we need a transformation of our energy systems to achieve a low-carbon Ireland that eliminates energy poverty and provides for a thriving, sustainable economy.   Transformation will include energy substitution – a different source, in a different location with a different route to the point of demand.  As with the thesis presented in Part 1, we posit that although not identical, Ireland is a fairly representative of the world’s challenge.  To illustrate what needs to be done we use a Sankey chart for the energy flow in all Ireland for 2018.

The energy flow diagram or Sankey chart shown above depicts the entire energy system for the island of Ireland in 2018.  From the left to the middle, the flow of energy from Total Primary Energy Requirement (TPER) to Total Final Consumption (TFC) is depicted.  In our chart we have also used information on energy efficiency from Ireland but also research from other countries – for example the USA – to illustrate how the energy is finally used, or more importantly, not.

This depiction of Used and Rejected Energy at the location of Final Consumption reveals the first transformation challenge: to radically reducing the amount of energy wasted at the point of use.  As has been said by many people, the cheapest energy is that which you don’t use… so eliminate waste of energy is the first step on transformation.

This point is starkly illustrated by the transport sector and the wastefulness of automobiles and other vehicles with internal combustion engines (ICE).  Two thirds of energy from the combustion is lost as heat to the radiator or out the tailpipe, as emissions in the exhaust and as noise.  Only about one third actually translates to driving the motor shaft.   Improving the efficiency of the ICE vehicle brings about some incremental gain in energy use and reduction in emissions.  Consider instead how the energy system of a vehicle is transformed when it is electrified.  An electric vehicle (EV) has electric motors, often directly driving the axles, that utilize more than 90% of the electricity stored in the battery.  Both efficiency and emissions are driven back upstream to the electricity power generation, where further transformation can be achieved.

Insulation as an energy investment

In domestic heating applications, a lot of energy is lost by leakage in particularly older housing stock that characterizes many countries around the world, including Ireland.  This is especially so when spaces are warmed, and water heated by combusting fuels to generate temperatures much higher than are actually required.  In old leaky houses, most of the generated heat literally goes up the chimney and out the windows and doors.  Opportunities to insulate older homes and build new homes to higher energy efficiency standards can be easily made into “good for all seasons” investments with payback of the capital investment measured in years not decades.

Similar opportunities for energy efficiency existing in large commercial and public buildings.  Insulation of building envelopes and the recycling of generated heat can help enormously in reducing energy demand.  Heat pumps can be used gather waste heat from industrial processes and recycle it into higher temperatures.  Innovative analysis of the energy system can lead to opportunities to use energy otherwise wasted.  The objective for any designer of an energy system is to eliminate cooling fans and towers!

Substitute both sides of the grid meter

The next opportunity for reducing demand for external energy from natural gas, oil or coal comes through electrifying the mechanism for heat transfer into the building – a heat pump, and then utilizing locally sourced heat from the adjacent environment to substitute for the fossil fuel.  For heat, this ambient energy is present in the earth – geothermal or ground source, in the air (air source heat pumps) or from the sunlight – solar thermal.

Tracking back from right to left in the full energy flow diagram above leads to the next substitution  opportunity to reduce emissions – in grid electricity generation.  Ireland’s picture is currently dominated by natural gas but has seen increasing amounts of penetration of renewable sources, mainly wind.  Hence Ireland, with most of its gas foreign and imported through pipelines emanating from one terminal in Scotland, is particularly vulnerable to the price and security risks outlined earlier.  Further progression of wind is anticipated, with stated goals around 70%. 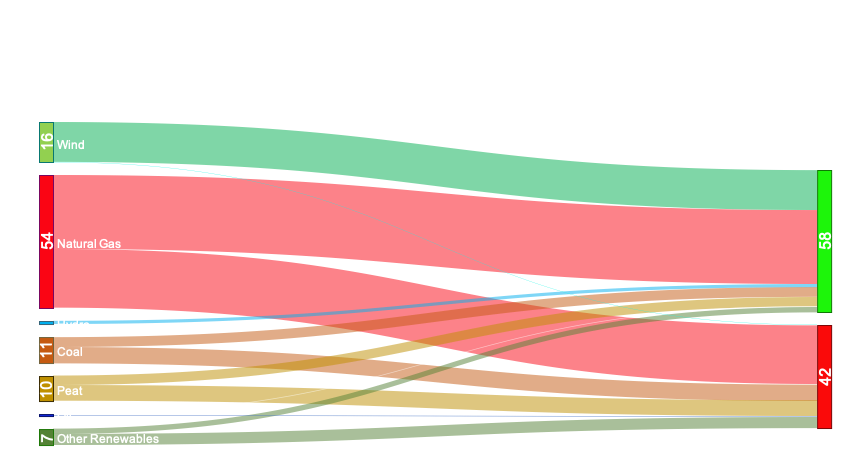 It is interesting to note that wind, solar and hydro experience much less conversion losses during generation that combusted fuels such as gas, coal, peat, oil and even biomass (which is included in the “Other Renewables” category in our second Sankey chart above).  That conversion efficiency and the indigenous origin of wind whether onshore and offshore might lead one to conclude that increasing the proportion of wind and solar are the solution to the energy trilemma.

However, increasing penetration of variable and intermittent resources like wind and solar introduce a pair of different challenges.  Firstly, the variable nature of wind, with the turbines moving at different speeds and different frequencies can destabilise the electricity grid which operators need to have managed to a tight frequency target or risk outages. Turbines driven by thermal combustion have the advantage of being able to provide inertia to the grid through a carefully managed operation of the turbines.  Similarly, thermal power can be “dispatched” to meet peaks of demand and/or shortfalls of wind power supply – assuming that the thermal fuel is immediately available of course.

These problems with renewables underscore the need for infrastructure improvements, short- and long-term storage, and “behind the grid” solutions to reduce and manage demand at the point of energy consumption, to lighten and level the burden on the grid.

How are we addressing the “Sankey” challenge

CausewayGT’s technological approach involves locally sourced “behind the grid” energy, targeting the decarbonization of large commercial and industrial heat with geothermal energy as a core part of our approach.  Locally sourced energy from the earth can be harnessed into large energy systems to provide heat for water and space heating and process heat including over 100 ºC.   Heat pumps at an industrial scale are a core part of our technology and radical efficiency and decarbonization benefits come from the heat pumps’ ability to transform the energy system.  The transformed system will meet customers’ needs at costs competitive to fossil fuel boilers, but with a fraction of the emissions. 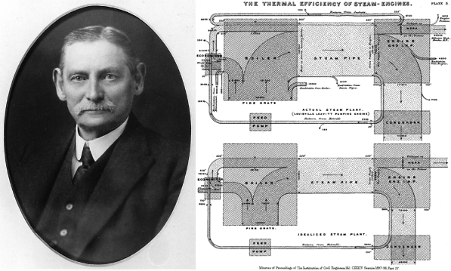 The Sankey chart is named after Captain Matthew Henry Phineas Riall Sankey CB CBE FIMechE (9 November 1853 – 3 October 1926), an engineer who was born in Nenagh, County Tipperary in Ireland.  His first and famous use of the diagram was to illustrate energy flow in a steam engine in 1898.