How geothermal can decarbonize heat in distributed energy solutions 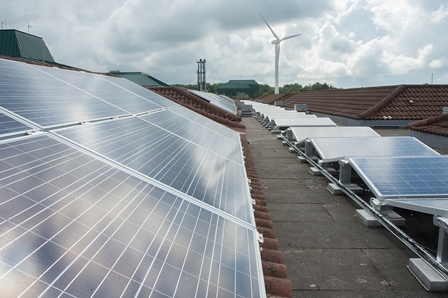 A very interesting report was released by RenewableNI and KPMG last week about the future role of distributed renewable energy generation in Northern Ireland (NI).  The report describes how the phenomenal increase of distributed generation in Northern Ireland, involving small-scale (typically less than 5 MW capacity) renewable energy assets (typically wind turbines), during the last 15 years.  The report goes on to present a compelling argument that further deployment of distributed generation could substantially aid the further decarbonization of NI’s electricity.

We agree the advantages of distributed solutions can outweigh the economy-of-scale benefits of regional utility generation and see how distributed generation can both relieve the burden on the grid and add to the resilience of the larger electricity system.

However, we believe that there is an even larger energy decarbonization opportunity that can be addressed through a wider aperture of the energy spectrum by including heat as well as electricity in the distributed energy solution.

Sankey diagram for the energy flow in all Ireland: electricity decarbonisation is progressing, we need more focus on heat.

To describe this problem and the related opportunity, we present again our All Ireland 2018 Energy Flow which we first published in a previous blog.  This Sankey chart represents all of the island of Ireland – NI represents about 20% of the energy, the Republic of Ireland (ROI) the rest.   In this you can see the flow of electricity from generation from primary energy sources on the left to use in Industry, Residences, Services and Agriculture.  It’s this electricity RenewableNI/KPMG are pinpointing in their push for more distributed renewable generation.

But also note that the energy consumption of the Industry, Residences, Services and Agriculture sectors i  s actually dominated by fossil fuels: natural gas, oil and coal.  Typically, the consumption of these fuels is about 2 to 3 times that of electricity.  These fossil fuels are combusted on site to deliver heat to warm spaces, provide hot water, and to drive industrial processes.  In so doing, heating accounts for about a third of all Ireland’s GHG emissions.

Geothermal energy, the power beneath us  , and solar thermal as well as biomass and biogas can be used to address this decarbonization challenge.  Instead of relying on gas in a network, or transported heating oil, propane or biomass, geothermal energy can be harvested locally in a geothermal well array that has little or no  post-installation visibility in the landscape and has no environmental impact, surface or subsurface.

A range of temperature and power capacity geothermal solutions are available today, some of which have no geographical or geological constraints and therefore can be applied anywhere.  The temperature range includes chilling for cooling buildings which is often a larger requirement because of the heat generated by electrical processes with larger facilities like data centers.

We’ve been asked often about the lack of historical uptake in many regions like Ireland.  The reasons include lack of demand for clean heat (until now), lack of awareness of the solutions, and lack of supply chain capability to deliver the solutions.  (Causeway Energies is singularly aimed at addressing these issues). 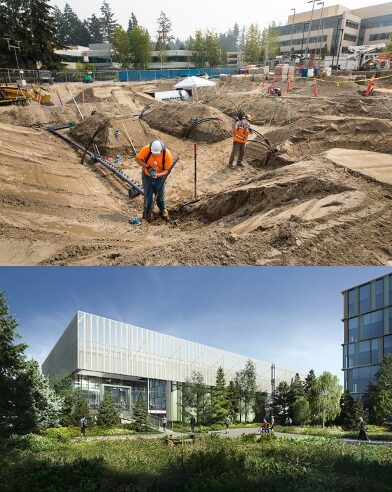 Another question we rightly get asked is can you show me examples of this technology at work?  Here’s a big application of geothermal energy in the Thermal Energy Center that underpins Microsoft’s new campus extension in Washington in northwest USA.  This new underground system will house dozens of 65-foot-tall thermal energy tanks that will be warmed by hundreds of geothermal wells drilled 550 feet (170 m) into the ground.  Through a system of heat pumps, chillers, and 220 miles of pipe running throughout the campus, the Thermal Energy Center will use the constant temperatures found below the Earth’s surface to heat and cool the new office buildings when they open in 2023.  The system eliminates the need for conventional gas boilers and electric chillers, cutting electricity use by an estimated 50%.  Although Microsoft and their contractors have recognized that they still need other renewable power sources, the geothermal heat reduces demand for that electricity.

For a smaller-scale and older example in Ireland, look no further than the Ballymun Ikea in Dublin.  Opened in 2009 this is still the biggest geothermal heat pump installation in Ireland with a 1.5 MW capacity for both heating and cooling delivered from 150 well bores each 120 m deep.  The total system cost €2 million with over 50% of that associated with the borehole field.  Ikea are a global role model for distributed clean energy solutions and have been for some time.  They have 50 geothermal systems installed around the world in combination with solar, wind and biomass.  They also have invested heavily in larger scale windfarms. 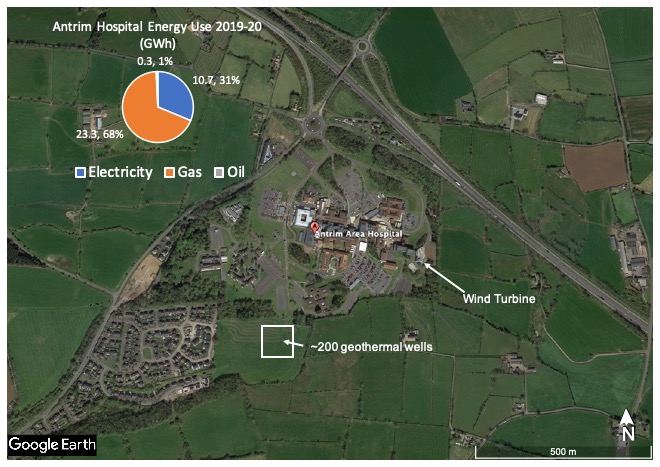 Google Earth image of the Antrim Hospital, energy usage and the subsurface footprint of a possible geothermal array that could replace fossil fuel usage in the facilities.

Greenfield sites in Ireland and elsewhere are more likely to be suitable candidates for distributed energy because retrofitting pipework, control and electrical systems can be expensive as well as the obvious issue if there isn’t land readily available to host the geothermal well array.

In our view though, brownfield sites can also be good candidates for distributed energy solutions involving geothermal.  Take for example the Antrim Hospital in Northern Ireland which is referred to as an exemplar in the RenewableNI/KPMG report.  The hospital, owned by the Northern Ireland Crown Estate, first installed renewable energy in the form of a 660 KW Vesta turbine in 2005.  In 2016 solar panels with a capacity of 50 KW were added to the roof of one of the buildings.  The hospital can run solely on wind power at night but still relies on the grid for the remainder of the electricity consumption.

Largely because of heating requirements, the hospital still consumes over 23 GWh of fossil fuel energy, the vast majority in the form of natural gas.  That is equivalent to an installed capacity of about 2.7 MWth.  Without considering seasonal peaks in heat demand, that equates to a geothermal array delivering 1.8 MWth to a heat pump system with a Coefficient of Performance (COP) of 3 or more.  The array would have approximately 200 wells, 125 m deep, to collect geothermal energy from the subsurface.  With the wells spaced about 6 m apart the array would cover about 1 hectare or about 2.5 acres.  We’ve depicted that as a square in one of the fields to the south of the hospital in the Google Earth map above.  Note that the geothermal system can also act as a sink or storage for heat if for example there is net cooling of the hospital during the summer.  By analogy with the Ikea system it would cost about £2 to £3 million to install and our preliminary analysis could be very competitive with natural gas, and radically reduce the hospital’s emissions, also at a very competitive cost.

Reliable, clean and largely unseen geothermal energy at affordable prices and very competitive decarbonisation costs can form a key component of any distributed energy solution, most anywhere in the world.  Causeway Energies is already talking with several customers about these solutions.  For more information about geothermal distributed energy solutions contact us at info@causewaygt.com.