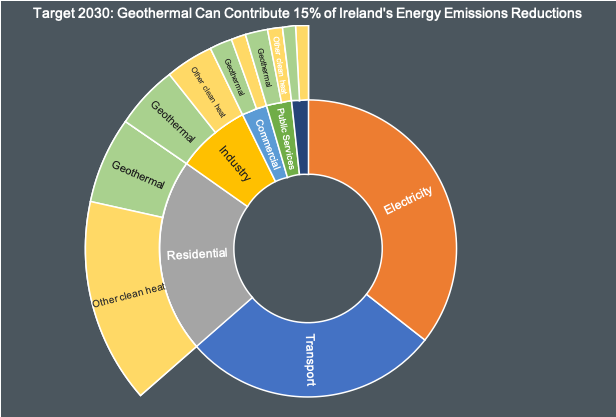 A representation of the energy-related GHG emissions reductions targeted by Ireland’s Climate Action Plan for a ~50% reduction in energy emissions by 2030 compared to 2020 levels. Most of the reduction is to come greening Electricity and Transport.   Geothermal can play a significant role in decarbonising Residential, Industry, Commercial, Public Services and Agriculture through clean, affordable and reliable heat.

Late last year two related documents were published by the Irish Government.  First, there was the 2021 annual report on energy by the Sustainable Energy Authority of Ireland (SEAI) which included an update on how the country had missed its 2020 renewable energy targets, largely because of a 50% miss on renewable heat.

A week later the Department of Energy, Climate and Communications (DECC) released their draft Policy of Geothermal Energy in the Circular Economy – a document long and yet still eagerly awaited by energy enthusiasts.  We see the two as directly related, because geothermal is a underutilised if not neglected renewable heat technology in Ireland which can greatly help the provision of clean, secure and affordable heat in homes, offices, public buildings and factories alike.

To catch up with countries like Sweden that are current leaders in making use of relatively low energy geothermal resources in the shallow subsurface, Ireland needs a best-in-class policy to accelerate both deployment of proven systems, getting on now with renewable heat development, and advance the delineation of deeper resources and the demonstration of technology required to sustainably utilise those resources.

We founded CausewayGT on the island of Ireland for personal, technical and commercial reasons.  The challenge of our mission of having geothermal energy play a substantial role in the decarbonisation of heat in commercial and industry is embodied in Ireland’s current status – dependent on mostly imported fossil fuels and ignoring local renewable heat opportunities such as geothermal and solar thermal that are proven and ready to go.  Most everyone knows that Ireland’s geothermal resources don’t involve geysers and volcanos like the “classic” geothermal regions of the world.  It seems however, that that perception also leads to a blind spot in seeing just how useful even our low temperature, shallow geothermal resources could be in providing affordable, low carbon heat.

Given that Ireland is actually typical of most of the world outside the margins of tectonic plates and volcanic hot spots, we often say: “if we can make geothermal work in Ireland, you can make it work everywhere”.

This week CausewayGT will submit our feedback to DECC on the policy draft.  We like a lot of what is already included in the draft.  For example, we fully support the intent of the policy to give certainty regarding the ownership and use of geothermal energy.  We do need a process for licensing the exploration for, and harnessing of, deep geothermal energy resources.  A system of reporting on geothermal projects is essential to accounting for energy usage and emissions avoidance.  And we also concur that integrating new policy and process into existing environmental, health and safety and planning regulatory frameworks is the winning way.

However, there are five big points which we want to make in our feedback, and we are sharing here for awareness and debate.

The first big point is for us to be very clear and ambitious on the overall objective of the policy itself.   The reason for having such a policy is left too implicit in our view and needs to be drawn out, like for instance:

“the policy aims to promote the sustainable development of Ireland’s geothermal resources such that they play a material role in decarbonizing heating and cooling for residential, public, commercial and industrial uses as a key element of fulfilling Ireland’s climate and EU commitments”

In our view there are three elements of strategic significance that need to be added to the policy to strengthen both the ambition, and the ability to deliver on that ambition.  The first is to add clear numerical targets for geothermal adoption aligned to both Ireland’s Climate Action Plan and to EU Directives on Renewable Energy. We believe these targets should be different for Shallow Geothermal (< 500m) compared to Deep Geothermal (>500m). As the Shallow resource opportunity is orders of magnitude larger than the current deployment levels, achieving the targets are more constrained by capability and economic conditions. In the Deep, understanding of the resource is less mature so be necessity the targets would have different characteristics.

As well as targets, there should be incentives in the form of financial support to ensure both the acceleration of uptake of proven Shallow Geothermal systems and the development of demonstrators and other proof points for Deep Geothermal.  For Shallow, it may be as simple as ensuring that carbon pricing is taken into account in the valuation of an electricity-based Renewable Heat solution compared to cheaper gas or oil systems.  For Deep, it’s about some support for exploration and development project risk upfront, and again some recognition for the lower emissions footprint in operation.

The third policy element we believe needs to be included concerns developing capabilities in the country to deliver on the targets.  For the most part, this is about the industry supply chain necessary to do all the work, but it also is about education, training, research and development to deliver jobs and grow the geothermal industry in Ireland. 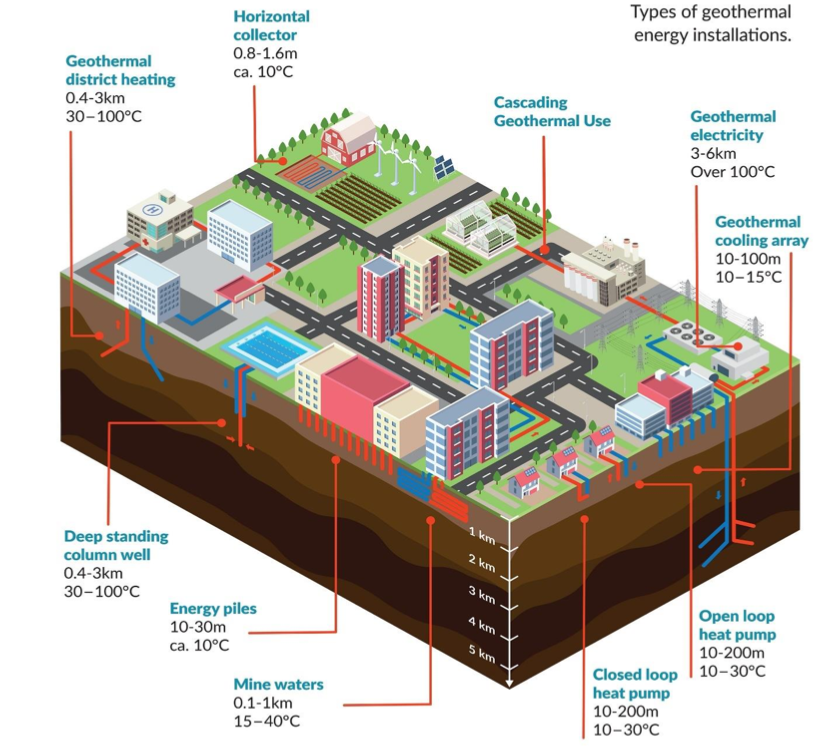 Different types of geothermal installation. From Geological Survey of Ireland 2021

Shallow Geothermal (< 500 m) resources are low temperature (~10 to 25 ºC) but almost always accessible in the earth beneath us – there is no or little geological risk.  In the cartoon above, Shallow Geothermal (aka “Ground Source”) is restricted to the uppermost layer, shallower than 1 km in this diagram.  Access by drilling is relatively cheap and the heat can be extracted in a safe and environmentally sound manner by water abstraction in many places or by conduction in most.  Furthermore, by using electric heat pumps to boost the temperature, heating (and cooling needs) of buildings can be met with a cost-competitive solution that depending on the carbon intensity of the electricity can be anywhere between 0% and 25% of the emissions of the fossil fuel equivalent.  So Shallow Geothermal is a low risk, neglected opportunity to substantively help address 80% of Ireland’s heating and cooling needs.

Deep Geothermal (>500 m, everything beneath the uppermost layer in the diagram above) is advantaged by higher and higher temperatures as we drill deeper into the earth.  However, one problem with Deep is that our understanding of geothermal resource attributes including temperature becomes hazier with depth and with distance from boreholes that provide direct measurements.  The geological risk and uncertainty make for a bigger challenge when we factor in the fact that drilling gets more expensive with depth.  There is a particular kick-off in cost between 500 m and 1250 m depth, depending on geology, where well construction calls for bigger drilling rigs able to install expensive steel casing into the drilled hole.  Hence drilling cost changes from less than €75/m in Shallow to more than €2000/m in Deep!  This is one reason why 500 m is a reasonable threshold to draw as the boundary between the two and is similar to what other European countries have done.  Hence although Deep Geothermal looks like a bigger prize compared to Shallow it is further away in terms of commercial proof of concept.  In climate action terms, emissions avoidance today is more valuable than that only starting in 10 years’ time, so we again emphasise the need to focus most effort on Shallow rather than deep.

These differing levels of technical maturity in our view mean that it is important that Shallow and Deep are for the most part treated differently in policy and regulation.  Indeed, perhaps the only common measure for both is that both Shallow and Deep Systems should be registered so we can better account for the energy provision and emissions reduction that geothermal delivers.  We believe that a simple permitting system – similar to, or embedded within existing building planning permission procedures will suffice for Shallow Geothermal and depending on energy use (a threshold of 0.1kW/m2 net energy extraction per unit area of surface ownership is suggested) the permit should only need registering – the permit is automatic.  Any water production or reinjection can be handled under existing water abstraction rules.  Our intent here is to ensure that we can get on with low risk, ready to go, Geothermal (or Ground Source) Heat Pump installations ranging in scale from single home deployments to MW size such as the 2008 installation in the car park of the Ikea in Dublin.

It’s a different matter for Deep Geothermal and we support the Exploration and Production Licensing approach proposed in the draft policy.  In our feedback we do emphatically agree with DECC’s point that we must avoid a licensing method that unintentionally leads to a gold rush style of stake claiming.  Instead, similar to Shallow, we suggest a bias towards licensing of projects to utilise the resource, rather than the resource itself.

We hope our feedback will be viewed favourably by DECC and our industry colleagues, appreciating our intent to both accelerate Shallow Geothermal deployment at scale and catalyse Deep Geothermal research, development and demonstration.