Geothermal is the key to fossil-free distributed energy systems 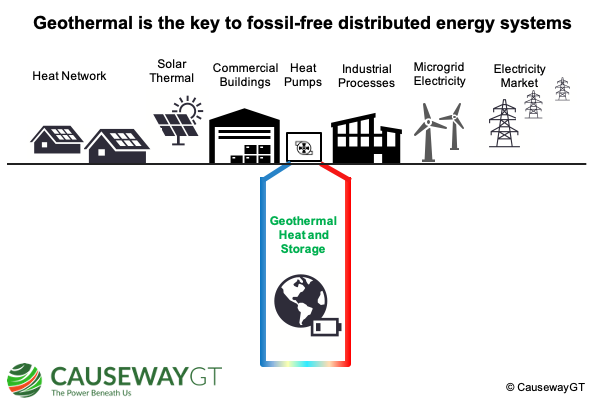 In our last blog we talked about how new business models are needed to support the transformation of the way we supply and use energy.  We focused on “Heat as a Service” (HaaS), Causeway Energies’s main customer offer, as a new way in which industrial & commercial consumers can get the clean heating & cooling they need at predictable and affordable prices, through reliable local sources, with no upfront capital.  The innovation of HaaS is as new application of an old concept, as “as a service” business models have already been well demonstrated by personal smart phones, industrial power purchase agreements and a wide range of other similar models.

The technological innovation that makes the smart phone the enabler of the data/communication/camera/etc as a service is the miniaturization of processing power and digital storage.  This allows the integration of many “data” services in one system.  A mainframe computer of 20 years ago in the palm of your hand.

Geothermal as an enabler

We see geothermal as a similar technological enabler for energy microsystems around industrial facilities and commercial/public service buildings.  Like smart phones, storage is a critical tribute.  Currently industrial/commercial heating & cooling systems typically use a mix of grid electricity and combustion of fossil fuels brought on to site.  With heightening demand to remove fossil fuels – particularly foreign sourced – from our systems, the desire for renewable heating and cooling solutions is increasing towards a clamour.  Today’s (and tomorrow’s) technological options of heat pumps, geothermal, solar thermal, aquathermal (rivers, lakes) and biomass can clearly adequately cover temperatures up to 150 ºC and in the case of biomass higher still.  In the more distant future green hydrogen may have a role in heating the highest temperature processes such as steel and cement manufacturing.

Meanwhile, geothermal has a key role to play in enabling the integration of other renewable energy technologies.  Here’s how. 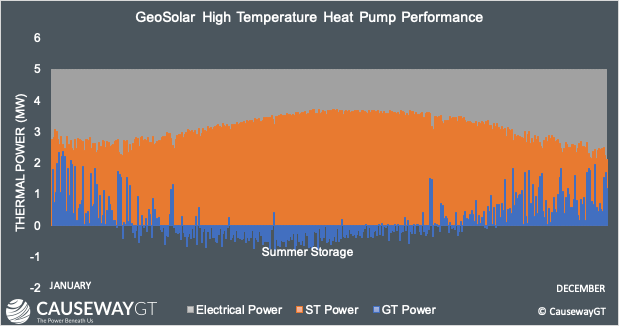 The potential for the earth beneath us to both provide and store thermal energy has been known for centuries.  Open loop circulation through a subsurface aquifer in which heat is recovered from a geothermal well and then the water is reinjected is common practice in geothermal heating in regions such as the Netherlands where there are geothermal resources of the right attributes.  Direct use of geothermal heat is becoming common practice in several sectors including horticulture in greenhouses, displacing natural gas as the fuel of choice. Aquifer Thermal Energy Storage (ATES) has become more common, where the geothermal resource is used to store or buffer other forms of heat.

Causeway Energies is focused on closed-loop geothermal systems in which heat transfer is accomplished through conduction from the rocks to a working fluid contained within a closed loop within a Borehole Heat Exchanger (BHE) typically drilled in an array of scores or even hundreds of such BHEs.  Closed-loop systems are more adaptable than open loop because there is no requirement for a warm or hot aquifer – most any geological formation will be suitable.  BHEs are also used for Underground Thermal Energy Storage (UTES) in the form of Borehole Thermal Energy Storage (BTES).  There are quite a few deployments at MegaWatt (MW) scale of closed-loop systems around the world, many of which use the storage capability to cover daily and seasonal variation in both demand and supply.  For example, in the Drake Landing Solar Community in Alberta, Canada, solar thermal energy is collected during the summer from arrays on the garage roofs on each community home.  This energy is stored in an underground system of some 144 BHEs each drilled to 37 m depth.  The heat is recovered in the winter to heat the homes.

Heat pumps hugely enhance both the potential and efficiency of geothermal thermal energy and geoThermal Energy Storage (geoTES).  Heat pumps are used to elevate the temperature of a low-grade thermal resource such as ambient heat in air, the very shallow subsurface (ground) or the water in a lake or a river.  Ground source, or shallow geothermal resources are advantaged by have a fairly constant temperature all year round.  Geothermal heat pumps can take heat of temperatures only 10 to 15 ºC (50 to 60 ºF) to deliver building space and domestic hot water (DHW) of over 65 ºC (150 ºF).  The efficiency of a correctly designed heat pump system means that even with temperature lifts of 40 to 55 ºC, the electricity used to drive the heat pump compressor is still only ¼ or less of the total heat delivered.  This Coefficient of Performance (COP) can be even better when energy efficiency, seasonal storage and other energy sources (such as waste heat from cooling) are integrated and optimized.  For example, i`n seasonal systems, reinjection of heat extracted from the building in the summer replenishes the geothermal resource for harvesting in the winter.  In addition, because of the smaller difference between temperature of source (building space being cooled) and that to the sink, ground source heat pumps use less electricity than air source heat pumps.

A great example of such a system has recently been deployed beneath the new campus for Microsoft in Washington, USA.  This system has dozens of 65-foot-tall underground thermal energy tanks that will be warmed by hundreds of geothermal wells drilled 550 feet (170 m) into the ground.  Through a system of heat pumps, chillers, and 220 miles of pipe running throughout the campus, Microsoft’s Thermal Energy Center will use the low grade but constant subsurface temperatures to heat and cool the new office buildings when they open beginning in 2023.  The system eliminates the need for conventional gas boilers and electric chillers, and cuts electricity use by an estimated 50%.

Heat as a Service

Causeway Energies has entered the commercial, public services and industrial market with an offer to design, build and even operate commercial systems similar in scale and performance to Microsoft’s campus.  We call this our “80 ºC Solution”, as it capable of providing heating and cooling replacements up to that temperature, more than sufficient for thermal comfort in the facilities and provision of DHW safe from legionella and other similar health risks.  We have infrastructure/project investment firms who are very keen to deploy their capital in such larger scale renewable heat schemes allowing for HaaS financial packages to be delivered to the customer.

Our offer starts with a review of the critical energy needs of the customer facility.  For example, if a process requires heat, what is the minimum temperature and rate/method of application of that heat?  We start with these questions because many of our current heating applications are thermodynamically “lazy”, applying high temperatures from gas or boilers through an inefficient heat exchanger to much lower actual temperature needs.

With respect to design of solutions we take an integrated approach, looking at a mix of energy sources as well as optimizing their use.  Geothermal heat pump applications are most effective from a cost and climate impact perspective when the electricity used is cheapest and has the lowest carbon intensity possible.  Hence demand side management and hence short-term storage of heat becomes a key opportunity to lower the overall cost of the heat.  For example, in an Irish setting, wind power is often cheaper at night, so a process in which heat is generated at night and stored for use the following day is going to be both cheaper and lower in GHG emissions.

We are also working hard on Research, Development and Demonstration (RDD) of higher temperature geothermal heat pump systems.  We call this the “120 ºC Solution” and the goal is to deliver a commercial and economic viable application than can provide steam to an industrial process.  Steam is a staple of many manufacturing processes in many different sectors, used to dry, heat, cook, blanche, treat, and seal in a variety of different ways.  There are already high temperature heat pumps on the market to deliver such sink target temperatures, so the challenge to reach commercially viable applications using geothermal heat as the source.  The chart above illustrates one of our bench testing simulation models in which solar thermal is combined with geothermal heat and GeoTES to form the majority of thermal power to a high temperature heat pump system, scaled to 5 MW in this example.  In effect, geoTES is used to buffer, store and back up solar thermal heat.  The GeoSolar Heat Pump provides a reliable baseload of higher temperature heat, 24/7/365.

In this proof of concept model, in which the COP is ~3, the economics depend on the capital costs of the installation of the BHE array and the electricity costs while the system is in operation.  Supported by funding by Invest Northern Ireland through the Centre for Advanced Sustainable Energy (CASE), we will build our understanding of these systems during the next twelve months or so as we investigate several real industrial examples.

To support our market disruption and RDD we are currently seeking investment from private as well as further public funds, as well as partner industrials who are committed to demonstration of these renewable heat solutions.

Please do get in touch to learn more.